Openshift is a platform for deploying web applications and services, using containers and SE Linux.

It can be deployed on your own infrastructure or on public cloud’s. Openshift online is red hat’s own hosting service.

It uses the industry standard Kubernetes from the Cloud Native Computing Foundation (CNCF) for running and managing containers at scale. Any applications can be run that adheres to the OCI (Open container initiative) - except those that use the root user to build an image.

You can use the image of predefined images or bring your own container image.

With support in OpenShift for features such as persistent volumes, you are not limited to just running stateless 12-factor or cloud-native applications

It is a platform to help you develop and deploy applications

Openshift has other security related requirements

In 2013 DotCloud announced the docker tool, it addressed 2 issues:

This made it possible to create applications that could be easily moved between systems, to be run in a container with a higher confidence that it would work.

Scaling the application required additional software - which did not exist, so companies had to create their own.

In mid-2014 Google announced Kubernetes - an open source system for automating deployment, scaling, and management of containerized applications. Openshift had been implementing its own orchestratino layer. After Kubernetes was announced Red Hat dropped it and adopted Kubernetes.

Kubernetes 1.0 was released in July 2015, it has since become the de facto standard for container orchestration.

Container as a Service#

Kubernetes does not fit existing service models (Saas, Paas and Iaas). So it is called Caas - Container as a service. Similar to Iaas but instead of getting a VM you get a Container. 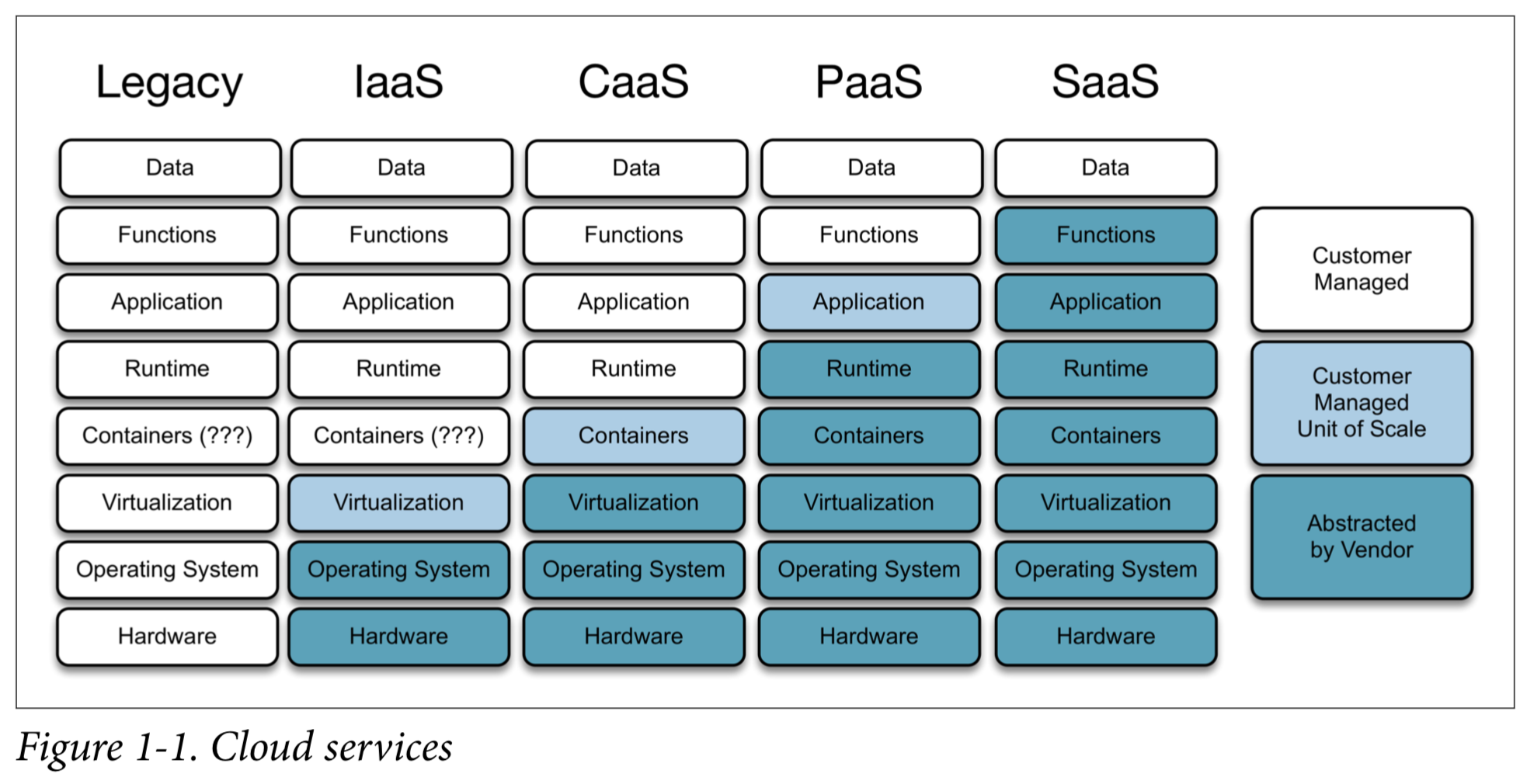 Platform as a Service#

You need to run a build tool to create your application image on a separate system and push that to an image registry from which it can be deployed.

In a Paas you would just provide the source code and the Paas would setup libraries and versions on programming languages.

OpenShift can take your application source code and, using a builder for the programming language you are using, create your appli‐ cation image. You as a developer do not need to provide instructions on how to create the container image; the platform will do this for you.

OpenShift can also accept source code that includes a set of instructions to create the application image in a Dockerfile. YOu have to do this yourself using docker, but Openshift can do this for you.

ie. You don’t need to have the docker tool on your own system - nor do you need a seperate image registry.

So Openshift can pull the source code from a remote git repo - gitlab, github or bitbucket. You configure git to notify openshift of repo changes which can trigger a new build and deployment of your application.

Meaning you don’t need to interact with openshift directly.

Openshift is both a Caas and a Paas. A general purpose container orchestration platform. So you can deploy your own bespoke applications or third party applications and db’s.

There is alot more info about setting this up in the book.

To deploy your applications to Openshift you either use:

You first have to login to the cluster

It is a multitenant environment

You will need to be familiar with the openshift command line tool: oc

You will typically login with:

The web console or oc client communicates with the REST API endpoint. You can access this rest api directly with an HTTP client

It has a Swaagger (Open) API Spec

The same access token can be used for the Rest API

You can get your token with:

To view the rest api calls made from the oc tool use --loglevel 9:

4. Adding Applications to a Project#

You always work in the context of a project

Any application you deploy within a project is only visible to other applications running in the same project - unless you make it public.

You would deploy multiple applications in the same project if they are tightly coupled.

Projects can also be created from the command line

To add another user:

To remove a user from a project:

Main methods for deploying an application:

Openshift provides templates for creating applications. yaml and json can also be used for maximum configurability

Deploying from the Catalog#

The openshift project acts as a global repository for builder images and templates. If an administrator wants to make available a builder image or application template to the whole OpenShift cluster, this is where they should add them

To view available templates and images

Search for an image or template

To deploy an image from within openshift use Image Stream Tag

Deploying a Set of Resources#

Switch to the import YAML/JSON tab.

It can be uploaded or entered directly into the webpage

Info on creating raw resource definitions or templates, or how to deploy an application using them is not in this guide. For more info, check the developer guide

This makes openshift more secure and suited to enterprise environments

A series of resource objects are created: imagestream, deploymentconfig and service:

Some resources have aliases:

You can get resources in a project with:

YOu get all the types with the deprecated:

Kubernetes and OpenShift help developers and operators build, test, and deploy applications in a containerized cloud environment. Applications may be composed of all of the components below, although most developers will be concerned with Services, Deployments, and Builds for delivering changes.

A container won’t be visible outside the openshift cluster, to expose it use:

this creates a route resource object

Get all resources in a project

Scaling up an Application#

You can see the new pods with

You change the deployment config

The application will be redeployed with the new configuration

To view what environment variables can be set use:

You delete an application using its label

When you deploy an application from an existing container image hosted on an external image registry, a copy of the image is downloaded and stored into an image registry internal to OpenShift. The image is then copied from there to each node in a cluster where the application is run.

An image stream is created

You can then deploy apps from the imported image

Note this only imports the image into your project

Pushing to the registry#

You can build an image locally (or remotely) and push it to the internal registry of openshift.

Before pushing an image you can create an empty image stream for it:

Tag the image with your image registry, project, name of image and version tag

Then push it to the Openshift internal image registry:

This is done to:

Containers usually prevent the applications from accessing the host, if a application run as root accessed the host it would be root on the host

Many images available on public image registries do not adhere to such a practice and need to run as root to work, even though they have no requirement for elevated privileges

In a typical OpenShift environment, not all images you find on pub‐ lic image registries will work

This can be overriden by an admin with:

6. Building and Deploying from Source#

Openshift provides the image building functionality for you.

You would use this when you want ot automate the complete workflow:

A hosted git repo is required

To deploy from source:

An additional resource will be created a buildconfig

To monitor the building of the image:

You can expose the service outside of openshift with

get the route of the application

The source build strategy does 2 things:

You can do the build step seperately with:

You can then deploy the app with oc new-app <name>

If the source code files change, you can trigger a new build by getting the build config and using oc start-build

Building from a local Store#

To revert to using the hosted code repo:

All builds triggered manually and source files supplied - can iterate without needing to to commit and push.

You supply the --binary option

Initial and subsequent builds are triggered with:

The build config is not linked to a source code repo, so oc start-build must be manually run each time.

If you want to run unit tests on the application source code to verify the image before pushing to the internal image registry - you can use a post-commit hook on the build.

The test is run by launching a new container with the recently built image and running the post-commit hook command inside the container. If the command run by the build hook returns a nonzero exit code, the resulting image will not be pushed to the registry and the build will be marked as having failed.

To specify the command to run:

To remove a build hook use --remove

Avoid contacting other services as the container will be run in the same project as your deployed application. This is to avoid accidentally running tests against production services.

If a database is required for tests - run a local SQlite instance.

Environment variables can be set with --env

If you need to set environment variables for the build step and deploying from source code, use --build-env:

with the 2 step approach: build then deploy.

if environment variables need to be added after the build config has been created:

7. Building an Image from a Dockerfile#