Perfect form of money for the internet - entirely virtual, fast, secure and borderless

Digital signatures enable a user to sign a transaction proving the ownrship of that asset.

Centralisation of early currencies made them fail. Parent companies and governments regulated and litigated them out of existence.

Invented in 2008 with the publication of Bitcoin: A Peer-to-Peer Electronic Cash System - under the alias “Satoshi Nakamoto”. Used prior inventions b-money and HashCash to create a decentrlaised currency issuance and validation system.

The Key innovation was the proof-of-work algorithm to conduct a global election every 10 minutes - allowing the network to arrive at a consensus every 10 minutes about the state of transactions.

The bitcoin network started in 2009 based on a reference implementation by nakamoto.

The implmentation of the proof-of-work algorithm (mining) has increased in power exponentially.

Satoshi Nakamoto withdrew from the public in April 2011.

Bitcoin uses, users and their stories#

At its core, money simply facilitates the exchange of value between people

Bitcoin is a protocol that can be accessed using a client application that speaks the protocol. A bitcoin wallet is the most common interface into the bitcoin protocol.

Just like a web browser is the most common interface into the HTTP protocol.

Another way to categorise clients:

Most important information is the bitcoin address…a QR code contains the same information.

Bitcoin addresses start with 1 or 3. There is nothing sensitive about a bitcoin address. It can be posted anywhere and you can create new addresses as often as you like. All of which will direct funds to your wallet. Many modern wallets create a new address for every transaction to maximise privacy.

Each address has a corresponding private key.

Until the moment this address is referenced as the recipient of value in a transaction posted on the bitcoin ledger, the bitcoin address is simply part of the vast number of possible addresses that are valid in bitcoin

Getting your first Bitcoin#

For someone selling bitcoin, this difference introduces a very high risk that the buyer will reverse the electronic payment after they have received bitcoin, in effect defrauding the seller. To mitigate this risk, companies accepting traditional electronic payments in return for bitcoin usually require buyers to undergo identity verification and credit-worthiness checks, which may take several days or weeks.

Methods for getting bitcoin:

One advantage of bitcion is the enhanced privacy. Acquiring, holding and spending does not require giving personal information to 3rd parties.

Users should be aware that once a bitcoin address is attached to an identity, all associated bitcoin transactions are also easy to identify and track.

This is one reason many users choose to maintain dedicated exchange accounts unlinked to their wallets.

Confirmations - Inital transactions show as unconfirmed. Meaning transaction has been propagated to the network but not recorded in the ledger - the blockchain. Transactions must be included in a block - this is done every 10 minutes.

The bitcoin system consists of:

A business will present a payment request QR code. That contains:

Helps the wallet to prefill information.

Transactions to that wallet can be seen at: https://live.blockcypher.com/btc/address/1GdK9UzpHBzqzX2A9JFP3Di4weBwqgmoQA/

I could not find the exact transaction on that page.

In simple terms the owner of some bitcoin authorizes the transfer to another owner. A chain of ownership.

The transaction also contains a proof of ownership of the amount being spent in the form of a digital signature. Spending is signing a transaction - from a previous owner to a specific bitcoin address.

If you only had an existing 20 bitcoin tranasction, trying to buy an item costing 5 bitcoin. Then you would pay 20 bitcoin - 5 bitcoin to the store owner - 15 bitcoin back to yourself (less the transaction fee).

This change address does not have to be the same address as the input, for privacy reasons it is often a new address from the owner’s wallet.

Wallets create the aggregate amount in different ways - some take many small transactions to make the exact amount. The transaction will generate change - similar to how you get change at a shop.

A purchase with change.

Aggregates many transactions into a single one - piling up coins.

One input to multiple participants (payroll)

Alice just sets a destination and an amount - the wallet does the rest.

A wallet application can construct transactions even if it is completely offline.

Most wallets keep track of available outputs belonging to addresses in the wallet.

Lightweight clients only track the user’s own unspect outputs.

Lets look up the inspent outputs from Alice’s bitcoin address:

View the transaction of Joe to Alice

Alice’s transaction says: This output is payable to whoever can present a signature from the key corresponding to Bob’s public address.

Only Bob has the corresponding keys for that address, only Bob’s wallet can present a a signature to redeem it.

Alice will encumber the output value with a demand for a signature from Bob.

Alice’s change payment is created by her wallet.

For a transaction to be processed in a timely fashion the wallet will add a small fee. The fee is not explicit - it is implied. It is the remainder of the outputs - the transaction fee

Adding the Transaction to the Ledger#

The bitcoin network is peer-to-peer - so blocks are propagated to all participants.

The transaction can be sent to any bitcoin node - a computer speaking the bitcoin protoocol.

Any bitcoin node receiving a valid transaction it has not seen before will forward it to all other nodes it is connected to…called flooding. The transaction reaches a large percentage of nodes in a few seconds.

A common misconception is that bitcon transactions must be confirmed by waiting 10 minutes for a new block or up to 60 minutes for 6 full confirmations. Confirmations ensure the transaction has been accepted by the whole network. This shouldn’t be needed for small purchases - same as credit card these days.

A transaction does not become part of the blockchain until it is verified and included in a block called: mining.

Bitcoin trust is based on computation. Transactions are bundled into blocks - which require an enormous amount of computation to prove but a small amount to verify.

Mining achieves a fine balance between cost and reward. Mining uses electricity to solve a mathematical problem. A successful miner will collect a reward in the form of new bitcoin and transaction fees - only if validated based on a consensus.

A good way to describe mining is like a giant competitive game of sudoku that resets every time someone finds a solution and whose difficulty automatically adjusts so that it takes approximately 10 minutes to find a solution. Sodoku can be verified quickly.

The solutions to a block of transactions called proof-of-work. The algorithm involves repeatedly hashing the header of a block and a random number with SHA256 hashing until a solution matching the pattern emerges.

The first miner to find the solution wins and publishes it to the blockchain.

It is profitable only to mine with application-specific integrated circuits (ASICs) - hundreds of mining algorithms, printed in hardware - running on a silicon chip.

A candidate block is the enw block.

By conventino more than 6 confirmations is irrevocable.

Full node clients can track the moment of generation in a block until reaching a certain address.

SPV (Simple payment verification) nodes check that a transaciton exists in the blockchain and has a few blocks added after it.

Bitcoin is an open source proejct and is available under the MIT license.

The software was completed before the whitepaper was written.

The satoshi client has evolved into bitcoin core. Bitcoin core is the reference implementation of the bitcoin system.

Application developers are advised to build wallets with modern standards such as BIP-39 and BIP-32.

A BIP is a Bitcoin improvement proposal. 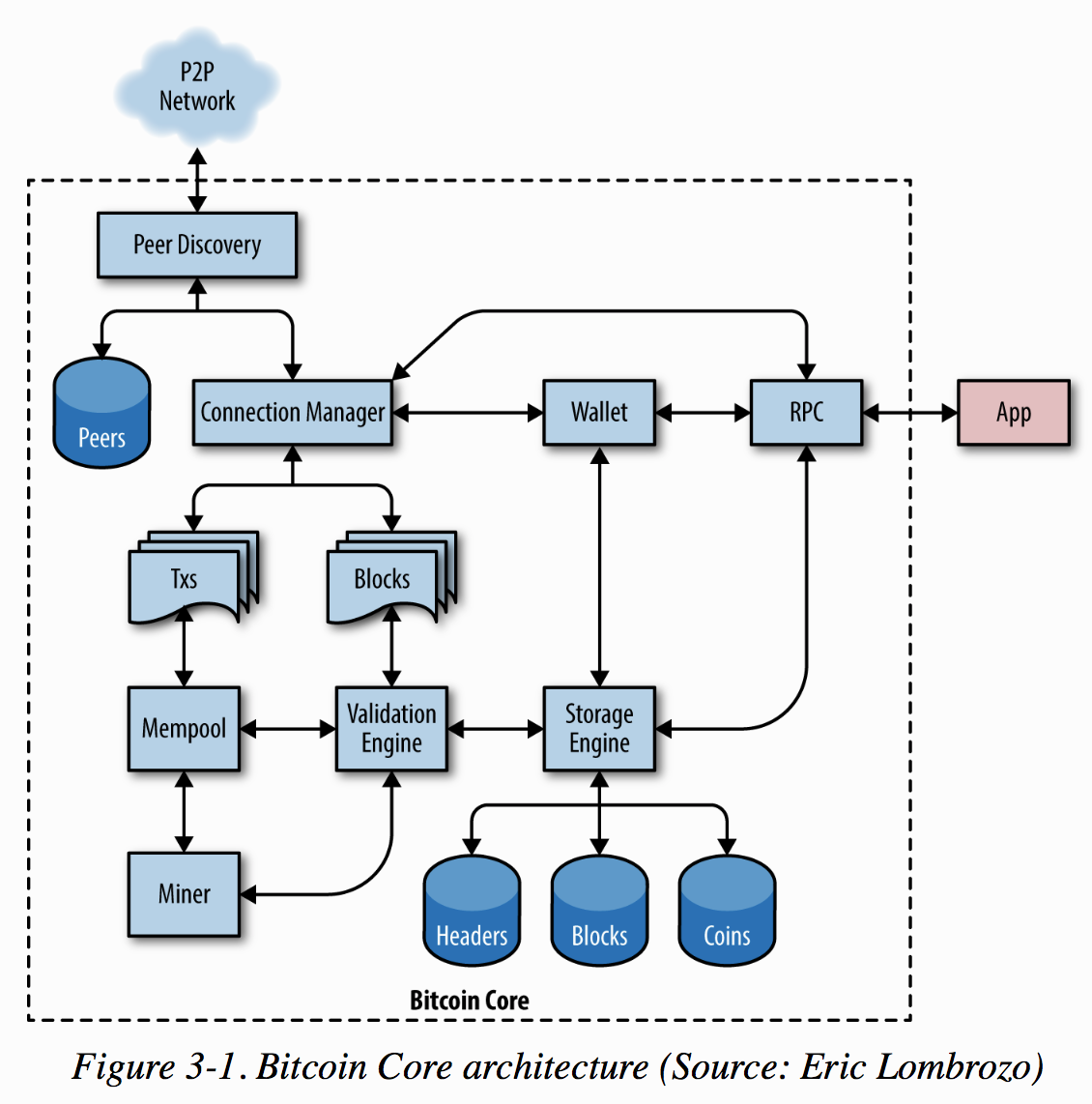 By running a node, you don’t have to rely on any third party to validate a transaction

Bitcoin core keeps a full record of all transactions - the blockchain - since inception in 2009.

Why would you want to run a node:

It starts getting deep…more reading in the book

Ironically, the communication and transaction data are not encrypted and do not need to be encrypted to protect funds.

Since the invention of public key cryptography, several suitable mathematical functions, such as prime number exponentiation and elliptic curve multiplication, have been discovered

Bitcoin uses elliptic curve multiplication as the basis for its cryptography

In bitcoin, we use public key cryptography to create a key pair that controls access to bitcoin

Asymmetric cryptography - the digital signature can only be created by someone that knows the private key, anyone with access to the public key and transaction fingerprint can verify it.

The private key is used to spend (and prove ownership) - it must be kept as secret and safe as possible. It must remain secret at all times - giving control to a third party gives them control over that bitcoin.

The private key must be backed up and protected from loss - a loss is a loss forever.

Creating a bitcoin is essential pick a number from 1 to 2^256. It is important to have entropy - randomness - to generate a private key.

So produce a number from putting a string through SHA256 hashing function and ensuring is it less than 1.158 * 10^77

I’m going to stop the notes here, as I have found a book that is a few less pages and will let me maybe get to my goal of learning the fudnementals faster grokking bitcoin

From here you can search these documents. Enter your search terms below.